Are you ready to open a can of worms on a brave new world?

This week sees the release of TESTAMENT: FUNNY BADGERS by Indigo Roth.

Described by the author as "a romping sci-fi fairy tale for grown-ups of all ages, but without all that pesky sex, drugs and bad language", Roth hopes that his first book will find a broad audience.

"It's not a children's book," he said in a recent interview, "but there's nothing in it that's unsuitable for any age group. Better yet, it's a lot of fun."

When Indigo Roth moves into the old house in Cambridge, he has no idea that there's a clan of badgers living at the bottom of the garden. 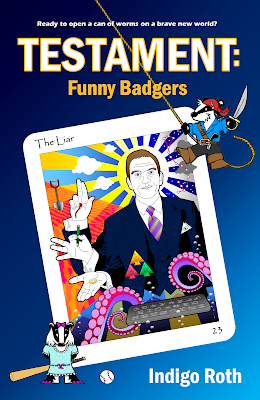 Or that they're Engineers.

This turns out to be the thin end of the spatula.

The half-eaten zebra on the landing is a bad sign, but what else is the lion renting the spare room supposed to eat for breakfast?

Over the months to come, aided by his loony best friend, a seven-foot black bear, the girl next door, a caffeinated midget, a dimension-hopping elephant and a multitude of badgers, Roth must make sense of it all.

And Death. But just the once.

Can Roth overcome the odds, elude a lethal squid/squirrel hybrid, and even take down the sentient cuttlefish network that threatens the divine flow of pizza?